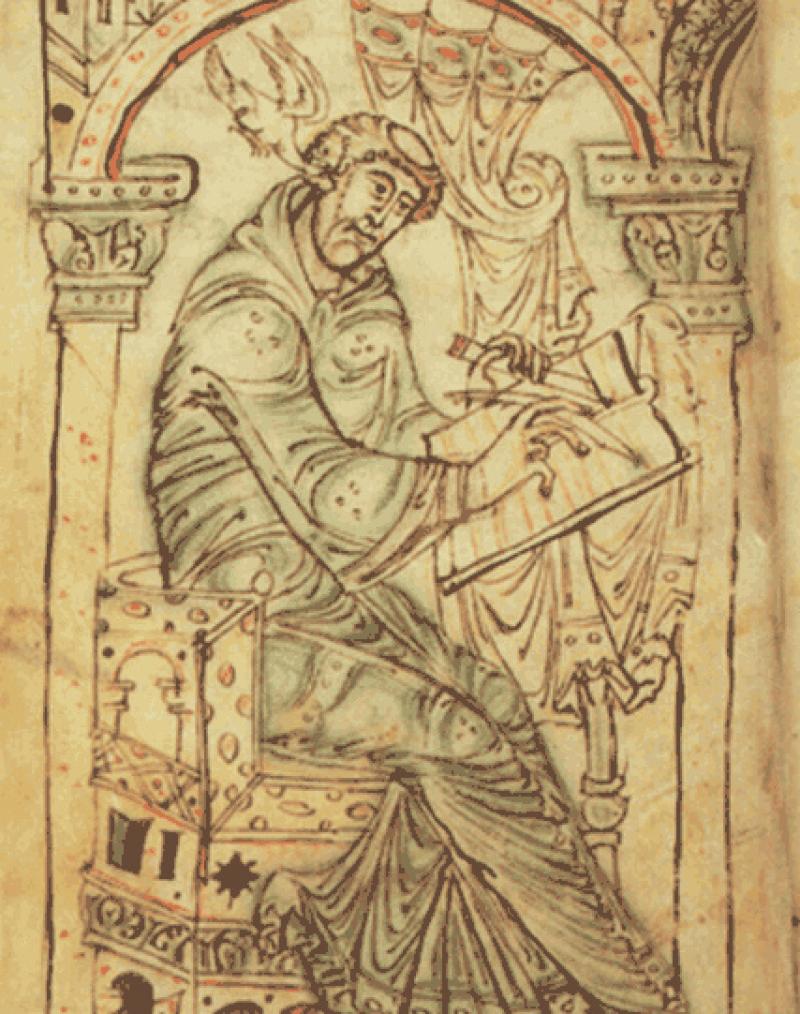 Books and Their Use[r]s: A Symposium

The Fall 2018 Symposium on the subject of 'Books and their Use[r]s’ is an opportunity for scholars to reflect on and exchange ideas about how and to what ends people have acquired, collected, organized, marked, common-placed, shared, disposed of, and otherwise engaged with the books they bought, stole, or borrowed. The talks will address not only British materials, but wider European and New World cultures.  We also aim to stimulate discussion among specialists in book history across national/regional, as well as traditional period, divides.

Esoteric. Peripheral. One of the least congenial of Augustine’s works. This is how present-day scholars typically describe the Soliloquia, one of the early philosophical dialogues by Augustine of Hippo. Yet the Soliloquia had an enthusiastic readership in Francia and England in the ninth and tenth centuries, as attested by surviving manuscripts and by the translation of the text into Old English.

This paper focuses on one of these manuscripts: Karlsruhe, Badische Landesbibliothek, Aug. perg. 195, which originated at Laon or Soissons in the mid-ninth century. Its copy of the Soliloquia is covered with glosses, explanatory notes, and construal marks, and while some of these indicate that the Soliloquia was consulted for its philosophical content, others attest to a more surprising use, as a substrate for elementary instruction in the disciplines of the trivium.

Glosses and reader-added marks in the Karlsruhe manuscript also allow us to directly witness the difficult labor of copying from a glossed exemplar. Though expert, these scribes were fallible. The Karlsruhe text of the Soliloquia preserves a number of interpolated glosses, which imply an earlier and more widespread practice of glossing the Soliloquia that is now nearly invisible in the manuscript record. Moreover, the scribes of the Karlsruhe manuscript employed a system for graphically differentiating among explanatory glosses, alternative readings, and corrections of errors, but visible breakdowns in this system illustrate precisely how glosses easily became interpolated into the main text by mistake during successive rounds of copying.

The Karlsruhe manuscript thus supplies a wealth of evidence for understanding the educational utility of the Soliloquia in particular, as well as more general patterns of hands-on engagements by Carolingian scholars with a Latin philosophical text.

From the early eighteenth century until well into the twentieth, it was common to inscribe early printed books as “Collated & Perfect,” often right on their title pages. And, even earlier, writers used “perfect” to describe books as physical objects; the term had specific currency in the book trade, too. As a way of making sense of this language, this talk will track practices for preserving and conserving early printed books as they evolved alongside both the concept of the “perfect” book and the modern development of Anglo-American bibliography. The long history of early modern books, I will suggest, is essential if we wish to understand the early modern past itself—and, just as importantly, if we want to understand how it is that we have come to approach the bibliographical record as we have. As I will argue, collecting standards that have caused early editions to be rebound, trimmed, pressed, washed, and “sophisticated” are not only to be regretted, either. Somewhat perversely, the same actions that have stripped old books of their original contexts have provided valuable evidence in their own right—if we look carefully.

The research tools available to scholars in the history of the book and the history of reading are in many cases based upon decades-old calendars and catalogs. Although the Pollard and Redgrave Short-title catalogue of printed books (STC) and its companion, the online English Short-title Catalogue (ESTC), are reasonably comprehensive, users are tempted to overlook the plus-sign at the end of many catalog entries, and forget that it designates the existence of additional surviving copies. Even though digital technologies allow the researcher to locate multiple copies of a single work with greater ease than ever, many libraries have been slow to place their catalogs online, and some for various reasons have not begun the task. Even if the existence of a book is known, scholars may not actually consult it. Because each copy of an early printed book is distinct in terms of its provenance and the material traces of reading which it might preserve, however, these copies must be examined before scholars are to achieve anything close to a general history of the relationship between the printed book and human thought. Such a history is clearly desired, but in the early modern period, provenance and marginalia research are still in their infancy. Despite the value of several prominent studies in the history of reading, marginalia remain the great untapped category of evidence in book history research. Even scholars who seek copy-specific details in surviving fifteenth- and sixteenth-century printed books typically examine a small number of copies located at well-trodden archives. The British Library, Folger Shakespeare Library, and other major repositories certainly cannot be overlooked by the scholar seeking evidence of an early printed book’s reading and use. But they represent the tip of a vast iceberg of surviving copies. Scholars will never learn what these copies can tell unless they travel to the archives where they reside.

This paper will bring together a series of case-studies based upon my own experience in obscure libraries. These fascinating finds include numerous copies of John Foxe’s Acts and Monuments annotated by sixteenth-century readers, a copy of Foxe turned into a Reformation scrapbook by a seventeenth-century poet, a papal presentation copy of Nicholas Sander’s De origine ac progressu schismatic anglicani that was probably never sent, and other books which offer valuable insights into how contemporary readers consumed and used early modern print. The essay’s intention is broader: to reveal the benefits to be gleaned from the use of bibliothecae obscurae as a research method. Libraries under consideration may include the now-dissolved St. Benedict’s Abbey library, Fort Augustus, Inverness-shire; the sixteenth-century Ipswich Town library, which survives intact in the headmaster’s office at Ipswich School; the library and archive of Stonyhurst College, Lancashire, which dates from the sixteenth century; and more.

Elizabeth Kolkovich, The Ohio State University, Mansfield, “The Countess of Huntingdon’s Books and Networks of Users in Early Modern England”

Despite some excellent recent work on women’s engagement with books, the history of reading is still primarily about men. Our methods have privileged written catalogs, ownership marks, and marginalia—all of which are in scarce supply for women. My paper offers new research on a little-known woman reader: Elizabeth Stanley Hastings, Countess of Huntingdon (1588-1633). She was a bookish woman who loved intellectual discussion, actively shaped local literary culture, and belonged to a highly literate family whose members owned and marked books. She left behind no library list or ownership marks, but scattered traces of her engaged reading emerge from her five devotional manuscripts and many letters, as well as the printed dedications and manuscript poetry that John Fletcher, John Donne, Thomas Pestell, and other male authors wrote her. As these traces indicate both what and how the Countess of Huntingdon read, her case study adds to our growing understanding of the varied ways early modern women read religious texts. The Countess of Huntingdon did not passively absorb her devotional reading; she interpreted and revised the books she read. She engaged with her books not as an isolated reader, but as an influential participant in familial and local networks of textual production and reception. As my paper argues for the value of recovering female readers using a broad range of evidence, it underscores the importance of tracing networks and communities of readers.

12:30-2:00 Lunch (Room 204)
Eric Johnson, Curator of Rare Books and Manuscripts at the Ohio State University, will exhibit a selection from the Rare Books & Manuscripts Library in Room 202.

In this talk, I will examine some of the ways in which amuletic texts, such as prayers, sacred names, and magical formulas, were used in Iberian/ Spanish literarature from the Middle Ages to the early modern period.  I will show how the material presence and powers ascribed to such objects and the writing inscribed on them were meaningfully evoked and cited in imaginative works, from the thirteenth to the sixteenth century.  My talk will discuss specific examples that shed light on the relationship between textual amulets and poems, dramatic works, and novels-- in manuscripts as well as early printed books.

Glenda Goodman, The University of Pennsylvania, "Copying Taste: Penmanship, Repertoire, and the Aurality of Music Books in the Early American Republic"

Women and men in the eighteenth-century United States had access to an unprecedented array of imported and domestically printed music, yet many amateur musicians chose to copy repertoire by hand into personal music books. Although difficult to categorize bibliographically, these hand-copied volumes of music encourage closer attention to the performative uses of books. As objects that facilitated multimodal performance, manuscript books demonstrate powerfully the interpenetration of sonic and visual dimensions of amateurs’ musical self-presentation. The social flux found in the early United States put pressure on amateurs who wished to cultivate civility, resulting in a culture of music copying not found in previous instances of scribal music publication. In particular, this corpus indicates the importance of musical accomplishments among members of the genteel class in the early national United States, where concerns about provincialism weighed heavily on white women and men who attempted to appear cosmopolitan. Their music books represented good taste on multiple fronts: in the repertoire selected for inclusion, in the quality of penmanship and fineness of the book itself, and in the adroit performance from said book. By exploring how amateurs used their music books to reflect their civility, this paper opens up for further consideration the importance of aurality and performance in book history.

Between c. 1614-18, the antiquary, loyal Catholic aristocrat, and youngest son of the executed 4th duke of Norfolk, Lord William Howard, read through his folio copy of John Florio’s monumental English translation of Montaigne’s Essays (1613). He did so with a pen in hand, preserving across most of its amply margined pages an unprecedented trove of some 900 separate manuscript notes. These marginalia invoke a rich reading life clearly amplified by the known contents of Lord William’s great antiquarian library of hundreds of medieval and Renaissance books, which he had built carefully over many decades at Naworth Castle in provincial Cumberland. These annotations reveal myriad ways in which Lord William “used” the Essays as a peculiar touchstone for a host of parallel personal interests and coincidental affinities that he shared with Montaigne himself. Both were humanists, both avid collectors of books and the literary commonplaces and anecdotes they contained, and both embattled Catholics living, reading, and writing within proximity to strong libraries under conditions of relative rustication. Much like Montaigne, Lord William was also quite free with his personal opinions and recollections, psychological speculations, and eccentric theories about human behavior—many of them expressed in the first person. Lord William systematically annotated, indexed, and cross-referenced his Montaigne, very much “using” the material text as a kind of “reading machine” suited to the longer-term exposition and memorialization of his deeply personal interpretive enterprise sustained over many years.