Popular Culture and the Deep Past 2019: Fairies and the Fantastic 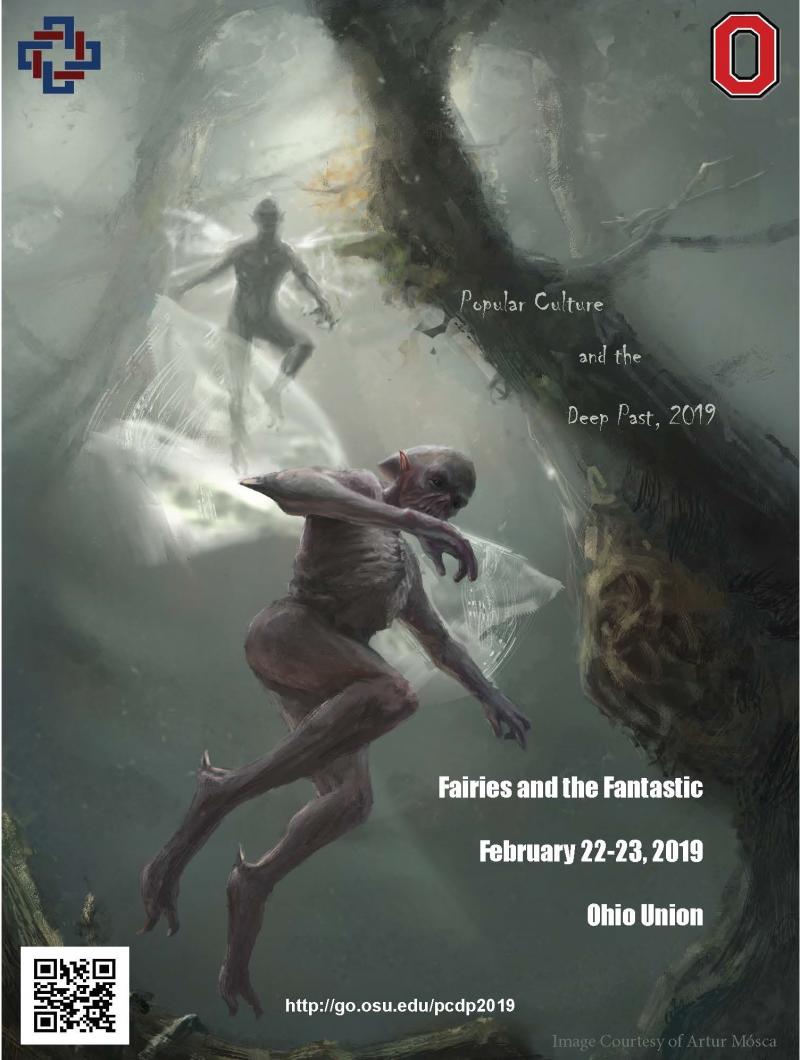 PCDP 2019: Fairies and the Fantastic

The Center for Medieval and Renaissance Studies at the Ohio State University is hosting a new Popular Culture and the Deep Past Event in honor of CMRS Director Emeritus Richard Firth Green, whose book, Elf Queens and Holy Friars (2016) has won the 2017 The Mythopoeic Society Scholarship Award for Myth and Fantasy Studies and the 2018 Medieval Institute Otto Gründler Book Prize.

We will have panels on the topic of Fairies and the Fantastic. In the Prologue to Chaucer’s Wife of Bath’s Tale, the narrator reminisces about a time when the land was full of fairies and the Elf Queen danced merrily on the green.  In the centuries since Chaucer, fairies, far from disappearing, have lived on in the popular imagination and its creations.  This conference is especially interested in Fairies and the Fantastic in the broadly conceived Medieval and Renaissance periods, but it also looks back to earlier examples of fairy belief or that explore the uses of fairies in later popular culture.  We have papers covering approaches from literary, artistic, cinematic, and gaming analyses, to historical and cultural investigations, as well as papers with broad geographical scope that examine the ‘presence’ of fairies outside Western Europe--in Scandinavia, Persia, and other parts of the world.

In keeping with the spirit of past PCDP events, the academic conference will be part of a broader ‘carnival’ of events and activities, including food- and culture-ways demonstrations; exhibits of artwork, books, and manuscripts; combat; gaming; and Cosplay.  We welcome proposals for non-academic presentations and activities.

Chris Woodyard, "The Many Roads to Fairyland" - 180 Hagerty Hall

7:30 p.m. Reception and Book Signing in the Hagerty Hall Cafe, featuring Shawn Schulte of Stauf's Coffee Roasters and his collection of Fantastic Teas, Tinctures and Other Fine Decoctions

Juliana Amir, University of Akron, "Utopia of the Fairies: A Cultural Analysis"

Jeb Card, Miami University (Ohio), "The Good People Who are Not People: Extrahumans, Conceptions of Time, and the Archaeological"

Talia A. Perry, Carnegie Mellon University, "A Palimpsest of Worlds: Follies, Fairies, and False Prophets in the English Picturesque Garden"

Moderated by Darrell Estes, OSU Department of French and Italian

Travis Neel, Ohio State (Newark), "Neither Adult Stories nor Children's Stories but Something Better: The Work of Re-Enchantment in Neil Gaiman's The Ocean at the End of the Lane"

Trevor Babcock, University of Indiana, "Gloriana’s Progeny: From Spenser to Tinkerbell and Beyond"

Moderated by Elizabeth Davis, OSU Department of Spanish and Portuguese

Anindita Bhattacharya, Dublin City University, "'Let’s go to the land of the Lalpori': Child Agency and The Fairy Brigade in Bengali and Irish Children’s Literature in Juxtaposition"

Kaori Inuma, Hitotsubashi University, "Public Reaction to the Fairy Photographs: Interwar Journalism in Britain and the US"

Emily Strand, Mt. Carmel College of Nursing, "The Perilous Realm: Faërie and the Fantastic in the Writings of J.R.R. Tolkien"

Gregory Bronson, Motlow State Community College, "Fairy King at the Crossroads: The Intersection of Fae and Infernal in Sir Orfeo"

Morgan Daimler, Independent Scholar, "The Evolution of the Fairy Courts: from Scottish Ballads to Urban Fantasy"

6:00 p.m. Fairies and the Fantastic Concludes

- The Confused Greenies of the Players' Patchwork Theatre Company, "The Hazards of Hunting Red Caps," a Commedia dell'Arte Fairy Farce

Did you know, due to a 1600 Naples law, that you don't have to pay rent if there's a Munaciello fairy living in your home?

Well, the scheming Brighella is going to make sure the miser Pantalone knows....

1:30 p.m. - Armor and Combat Techniques from the Norman Period through the 14th century

Unless otherwise indicated, all events will take place in the Ohio Union, 1739 North High Street. Admission to all events is free and open to the public, though we do encourage attendees and presenters to pre-register, especially for the Friday keynote reception, so we have a general headcount for catering, etc. See the event schedule and/or the registration form (linked below) for further details.

A big thank you to our co-sponsors!

The Center for Folklore Studies

The Department of English

The Department of French and Italian

The Department of History

The Department of Spanish and Portuguese