Disabilities and Abilities in the Middle Ages & the Renaissance 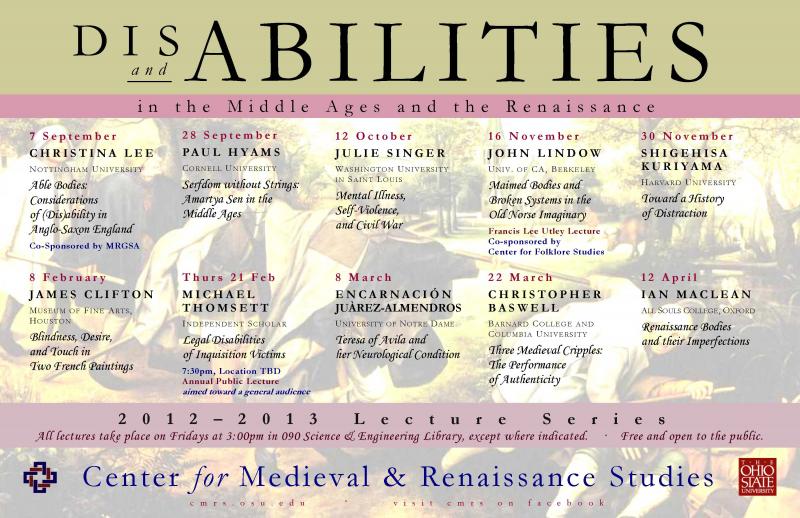 Co-Sponsored by the Medieval and Renaissance Graduate Student Association

The body is a useful instrument for medieval writers to charter desirable an undesirable traits. Physical features may be used as 'signs' so: how much can we rely on medieval writers when it comes to studying disability? Can they really tell us anything about attitudes? Also: how much do concepts connected with impairment create disabilities? Are differences made between congenital impairments and acquired illness? Some fine studies of medieval disability have been published of late, but there are still a number of questions that need consideration. In this paper I will examine how impairment compares with other 'inabilities', such as gender, age and status. I will look at literary texts but also at normative sources, such as laws and observations from material culture.

Serfrom without Strings: Amartya Sen in the Middle Ages [pdf]

What is poverty? What does it mean to label people as "poor"? Social scientists tend to reach for the measurable in their definitions. Equating poverty more or less with starvation, the inability to sustain life, they have often calculated the income required for this, and called it the "poverty line". The poor are those who live below this. Critics have long pointed out the many defects of such a view, but the language is nevertheless still in frequent use. And historians have tended to follow the crowd.

One influential recent attempt to do better is the Capabilities Theory of Nobel laureate, Amartya Sen. This located the essence of poverty in the inability of some men and women to perform certain mundane acts that ought to be within the power of all. Not starvation alone but exclusion from freedom marked off the poor, a formulation that has attracted conservative applause for the liberal economist.

Freedom has, of course, a quite concrete and down-to-earth connotation to historians. Specialists in slave and serfdom societies quickly recognize sees that Senâ€™s "capabilities"—that full participation in community life from which the poor are excluded—map closely onto the disabilities of servitude. Sen's understanding of "poverty" is virtually serfdom without the strings. Perhaps then the historian can add some perspective to the common criticism that Sen gives too little weight to power relations and the role of law in maintaining and validating poverty.

In this paper I first sketch briefly and without frills or exegetical polemic what I take to be the gist of Senâ€™s theory. I then argue a case for the serfdom analogy. I note that the early medieval opposition was Potens/Pauper (not yet Dives/Pauper), since the "poor" were those subject to oppression by the powerful. I briefly examine the takeover of servitude by national laws and Marc Bloch's three (questionable) "signs of serfdom". I then ponder a few consequences of this insight for the study of medieval servitude, and offer a few modest suggestions as to lines of argument on the nature of medieval poverty. I end with some thoughts on the special case of famine and what this might suggest about the persistence of poverty in a Western world still dominated by Judeo-Christian attitudes toward charity and the equal worth of rich and poor.

Around the turn of the fifteenth century it might well have seemed to many French people that the world was going quite mad. King Charles VI's scarcely mentionable mental illness was soon mirrored at every level of social experience, from the irrational civil war through which the body politic tore itself apart, to reports of elevated suicide rates among the common people. Allusions to suicidal impulses and acts recur in an astonishing number of works composed in the first three decades of the fifteenth century: in sermons (Jean Gerson's Vivat rex), political pamphlets (the anonymous Songe véritable), mirrors for princes (Jacques Legrand's Livre des bonnes meurs), diaries and chronicles (by Michel Pintoin, Juvénal des Ursins, and theBourgeois de Paris), poetry and prosimetra (Alain Chartier's Livre de l'Espérance).

In these texts, self-violence is an act marked by political implications that far exceed individual mental health concerns. Indeed, rather than constituting a symptom or manifestation of a mental disability, suicidal acts are presented in early fifteenth-century French literature and chronicle as the cause of a disability of a different sort: a direct attack on a surprisingly corporeal body politic. Exploring the intersection of the physiological and the metaphorical realms, we will see how the rhetoric of suicide brings together discourses of bodily disability and political disunity.

Maimed Bodies and Broken Systems in the Old Norse Imaginary

This lecture treats the use of bodies and body parts as they relate to kinship and social systems in Old Norse heroic legend and myth. In various ways, body parts can be appropriated for cosmic purposes or forfeited for enhanced abilities. But if an intact body represents an intact kin group (as language such as 'within the knees' for 'kin' suggests), appropriation or forfeiture of body parts suggests loss of kin, and also flaws in social systems in which kinship plays a role. Indeed, body parts and kinship—especially kinstrife—relate in powerful metaphorical ways.

Toward a History of Distraction

Why was being distracted once synonymous with being mad? And why did distraction later come to figure as a much less radical disability? Starting with close analysis of some iconic Renaissance images, my talk will spotlight the entwined histories of curiosity, death, and the power to attend.

In a discussion at the Royal Academy of Painting and Sculpture in Paris in 1667 on Nicolas Poussin's painting of Christ Healing the Blind (1650), the participants assumed that fidelity to the biblical text was part of the painter's brief, yet they could not account for several aspects of the painting or even agree on whether Poussin depicted the miracle at Capernaum (Matthew 9) or the one at Jericho (Matthew 20), a point still unresolved. Modern scholarship tends to view Poussin's painting as thematizing seeing and (proper) looking, but this paper returns to the relationship of the painting to its textual source(s), viewing it as a "visual exegesis" of Scripture, and examines the range of possible readings of both Poussin's painting and a related, but remarkably different, painting by Philippe de Champaigne (ca. 1660). Particular attention is given to the desire and faith of the blind men and to Christ's potent gesture.

Presented by: Michael Thomsett,, Independent Scholar, Author of The Inquisition: A History

People brought before tribunals of the Inquisition faced considerable disadvantages, and their denial of the right to present a defense was a clear and profound disability. For example, for most of the period of the Inquisition, the accused were not allowed to face their accuser and were not allowed to have an attorney. If an attorney was allowed and that attorney did too good a job defending the accused, the attorney might also face charges. Tribunals were allowed to bring their own charges, and confessions obtained through torture were admissible. In some locations, the wealthy citizen was likely to be accused of heresy. In the event of conviction, the Church seized that person's assets, evicting the family. Tribunals were thus self-funding at the expense of the accused citizen. This conflict of interest placed great hardships on individuals who did not have the right to present a defense or to insist on some form of proof of their crimes. Perhaps the greatest disability of all was that of illiteracy. Many victims were uneducated whereas the tribunals consisted of the most highly educated priests and experts in the law.

Teresa of Avila and her Neurological Condition

Teresa de Ahumada y Cepeda (1515-1582), suspected nowadays of having the stigmatized disease of epilepsy, was a Carmelite nun who reported having divine visions, dedicated her life to spiritual perfection, and died with an aura of sanctity. She was beatified in 1614, canonized in 1622, and proclaimed doctor of the Church in 1970. After she started experiencing involuntary graces around 1554, some male clerics, fearing that the phenomena was dangerously reminiscent of other non orthodox practices in the period, ordered the nun to explain her extraordinary occurrences. In the resulting autobiographical account, Libro de la vida (1565), she offers a detailed history of her impairments and hallucinations, which present neurologists identify as ecstatic epilepsy, in relation to her spiritual development and the social persecution she suffered.

This analysis examines, from a disability and phenomenological perspective, how Teresa constructs the defense of her corporeal difference in interplay with cultural assumptions and the social responses to bodies in the period. The paper argues that Teresa's impairments function as the unifying core of the various purposes of her book: personal apology, doctrinal exposition, and introspective examination of her spiritual evolvement. The forty chapters of Libro de la vida share the objective of explaining and justifying the intimate and spiritual evolution of a human being mediated by the experience of a chronically ill body, whose symptoms were dangerously misunderstood by the society of her time.

This lecture explores two overlapping issues, one about method and the other about broad shifts in the cultural history of disability in our shared period. First, in the state of our knowledge—largely unmapped, even suppressed by scholarly inattention, and conceptually still inchoate—can we even begin anything like a "cultural history" of medieval disability? Second, and despite that question, I will make a claim for a sea-change in the nature of disabled identity in the generations on each side of 1300, from a kind of "essential" (if often miraculously cured) disability, to a sense of disabled identities generated by the increasingly self–conscious techne of performance. Finally, I will propose, if not a cause of this great shift, at least a significantly contemporaneous shift in the history of legal record-making.

Renaissance Bodies and their Imperfections

Over the last forty years, the history of the body has been a vibrant and very broad field of study, encompassing elements of cultural, social, political and religious history, and addressing such issues as materiality, representation, canons of beauty, sexuality, the mind-body problem, and the emergence of the modern self. In this lecture I shall look at the Renaissance body as it emerges from the Middle Ages in its religious, medical, aesthetic and cultural dimensions. I shall examine through a range of images and texts the ways in which it is constructed and presented both with regard to its perfection and to its imperfections. I shall investigate its anatomy, physiology and pathology, its secrets, its 'natural' animal propensities, its relationship with the soul, its identification with the self, and finally, its lower or ignoble functions.

[pdf] - Some links on this page are to .pdf files.  If you need these files in a more accessible format, please contact cmrs@osu.edu . PDF files require the use of Adobe Acrobat Reader software to open them. If you do not have Reader, you may use the following link to Adobe to download it for free at: Adobe Acrobat Reader.