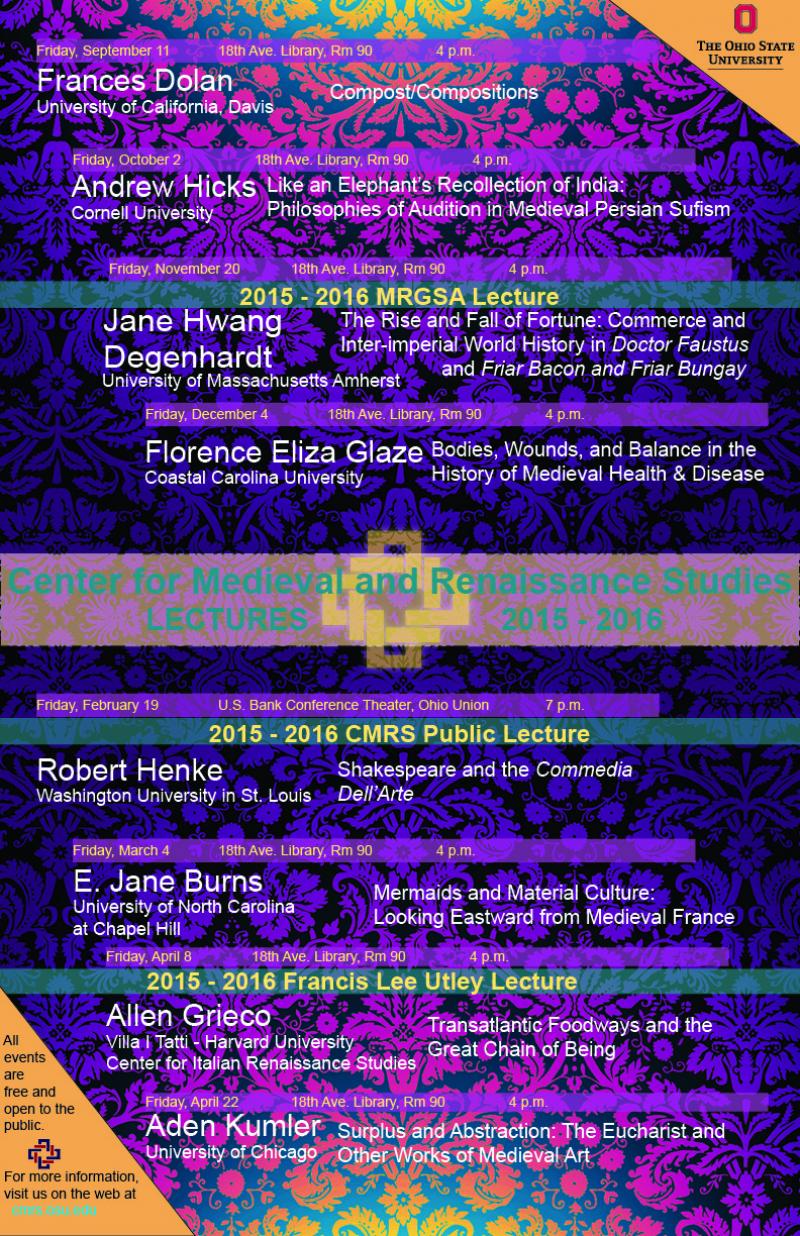 Abstract: As part of an explosion of agricultural experimentation and innovation in seventeenth-century England, many “improvers” turned to composting as both an “ancient practice” and “newly born.”  The composting practices they advocated resembled the very particular practices that characterized early modern reading, remembering, and writing.  In comparing composting, commonplacing, and composition, amendment and revision, I hope to draw attention both to the importance of soil amendment in early modern English agriculture and to the ways it generated writing and modeled what writing might be. Focusing on early modern agricultural treatises, this talk will consider the compost pile as an archive, a commonplace book, an occasion of writing, and a pungent figure for assembling and ripening the past’s leftovers in the service of some future enrichment—that is, for the work of early modernists today.

Abstract: In medieval Perso-Islamic culture, metaphors of music and musical experiences were employed as vehicles to convey a variety of mystical concepts. For many Persian poets, Sufis in particular, the ethereal modes through which music communicates with its listeners embodied the paradoxically disembodied “taste” or unmediated experience (ẕauq) of the divine realities. Through an almost Heideggerian dialectic of revelation and concealment – or in the Quranic terms often employed by the Sufis, ẓāhir and bạ̄tin, manifest and hidden, exoteric and esoteric – proper musical experience (samā‘) becomes a conduit for the very transcendence of music itself. Hearing is not delimited by the audible range of the material ear, for this external sense (ḥiss-e ẓāhir) must yield to an internal sense (ḥiss-e bāṭin), signified by the auricular metaphors gūsh-e jān and gūsh-e dil, the “ear of the soul” and “ear of the heart.” These in turn are poetic evocations of a deeply Pythagorean, but specifically Persianate reinterpretation of Greek harmonic theory, one not grounded in the rationality of mathematical ratios, deduced through controlled experimentation, but modeled instead upon Pythagoras’ ethereal auditory powers, bestowed through ritual purity. My argument proceeds in three stages: first, I offer some general background on samā‘ (spiritual audition) in medieval Persian Sufism; second, I trace the philosophy of audition through the soundscapes of philosophical Sufism, particularly Shihāb al-Dīn Suhrawardī (d. 1191) and his commentators; third and finally, I conclude with a reconsideration of musical play and metaphor in Persian poetry, particularly Jalāl al-Dīn Rūmī (d. 1273).

Abstract: This talk explores how two late sixteenth-century plays participated in a larger cultural discourse linking cycles of imperial rise and fall to the force of fortune. I begin with a consideration of the shifting meaning of “fortune” in the period and its gendered articulations, focusing on how new forms of economic fortune affected understandings of cosmic fortune and its relationship to free will. Through brief discussions of Machiavellian philosophy and a sixteenth-century visual tradition linking iconic representations of Fortune to Occasion, I identify a gendered dialectic between fortune and human will in which masculine action is increasingly privileged. Then, turning to the plays, I consider how the stage appropriated this dialectic in order to problematize and reframe it. Marlowe’s Doctor Faustus charts the rise and fall of its protagonist’s fortunes in relation to the cyclical turns of world empire and the over-reaching ambition that helps drive its fluctuations. Faustus’s imperial aspirations, the play suggests, offer a parody of world empire’s tragic course and implicate the Reformation in a cautionary tale about the dangers of fueling fortune with human ambition. By contrast, Greene’s Friar Bacon and Friar Bungay gives freer reign to fortune, positing a more celebratory view of imperial ambition and envisioning British empire on the cusp of a glorious ascent led by a female monarch. In both plays, Helen of Troy occupies a central symbolic position – showing how the dangers or possibilities of fortune find expression through female conquest or opportunism.

Abstract: Medieval conceptions of human health and disease, that is, the principles by which the sick were treated by learned medical practitioners, derived most of their theoretical bent from surviving textual productions of ancient medical theorists like Galen and the Hippocratics.  In the main, therapeutics were similarly guided by these principles, regardless of whether therapies involved dietetics and regimen, pharmacy, or surgery.  Yet, currency in authoritative knowledge varied over the centuries with the production and circulation of new translations, the movement of peoples, and the opening up of European marketplaces to a rich pharmacopeia from Outremer and beyond.  My presentation sketches first the general process by which knowledge, and access to new knowledge, changed over time; I then explore some of the scenarios we now understand better than ever wherein known practitioners and translators operated at the fore-front of innovative medical theory and practice. My overall goal is to envision the lived experiences of the sick and the injured, and the tools by which medical authorities endeavored to meet their often pressing physical needs.

Abstract: Especially if one views the “commedia dell’arte” in its relationship to Italian scripted comedy of the day, Shakespeare thoroughly absorbed the Italian system of masks.  Despite the fact that Italian professional actors, who scandalously had women actually play female roles, abruptly stopped visiting England in 1578, a professional interest in the Arte emerges in London theater of the early and mid 1590s, as Shakespeare explicitly deploys versions of Pantalone, the Dottore, the Capitano, and the Zanni in plays such as The Taming of the Shrew, Love’s Labour’s Lost, and the Merchant of Venice.  Shakespeare’s interest in foolish old men, loquacious pedants, braggart soldiers, and plot-controlling servants seems to have waned in his mature comedies, but resurfaces in his tragedies, in figures such as Polonius, and in the character system of Othello.  One of the more persuasive “sources” for The Tempest is the Arte subgenre of  “magical pastoral”: a set of Italian scenarios representing a magician on an island populated by spirits and shepherds who causes a group of travelers to shipwreck.

Abstract: Mélusine, a fourteenth-century snake-tailed woman who can fly, derives in part from medieval narrative traditions of fairies and mermaids. It is her excessive wealth, however, that strikes “wonder” and fear into onlookers at the court in Poitou. How might we draw on items of material culture used to characterize ​Mélusine’s lavish wedding celebration to help understand this ornately clad and bejeweled courtly woman in a more global context?

Abstract: Doctors - as well as any health conscious consumer of the Renaissance – habitually considered the impact that solid foods and liquids were thought to have on the human body. While some of this information was available in a variety of written and oral sources (dietary treatises, literary texts, recipe books, and so on), individuals could also rely on their own senses to try and understand the characteristics and qualities of what they chose to eat or drink. Two senses in particular were singled out as the ones giving the most trustworthy information: taste and sight. Both the taste system of the Renaissance (derived from Aristotelian parameters) and the food-related color spectrum were integrated into a widely understood frame of reference that was used not only by doctors and consumers for health-related concerns, but also by artists and writers to communicate social and cultural meaning. 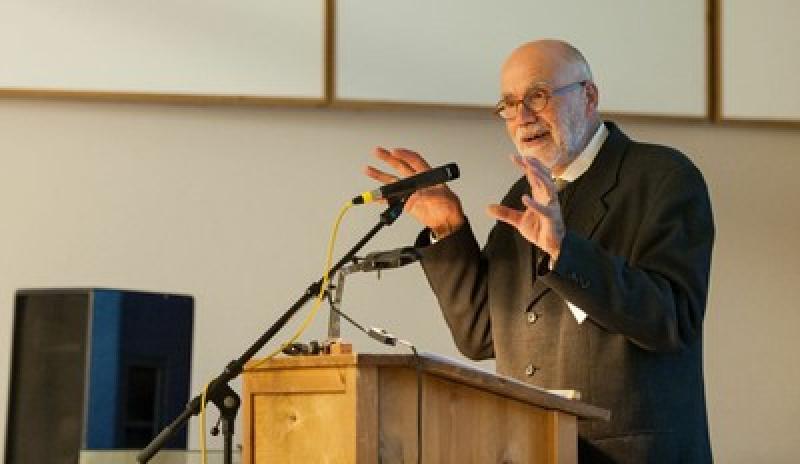 Abstract: If the textual closeness of medieval chant books to the Bible and the context of rituality in which they are used provided them with an outstanding dignity, in the context of liturgical practice they had but a referential status with regard to voice and ritual performance. Moreover, an increasing desire for religious internalization and immediate experience of the Divine seem to foster increasing dynamics of relativization and even devaluation of the written text. The paper wants to map this status of ambiguous mediality of premodern liturgical books.

Aden Kumler (University of Chicago): "Surplus and Abstraction: The Eucharist and Other Works of Medieval Art"