Feast and Famine in the Middle Ages and Renaissance 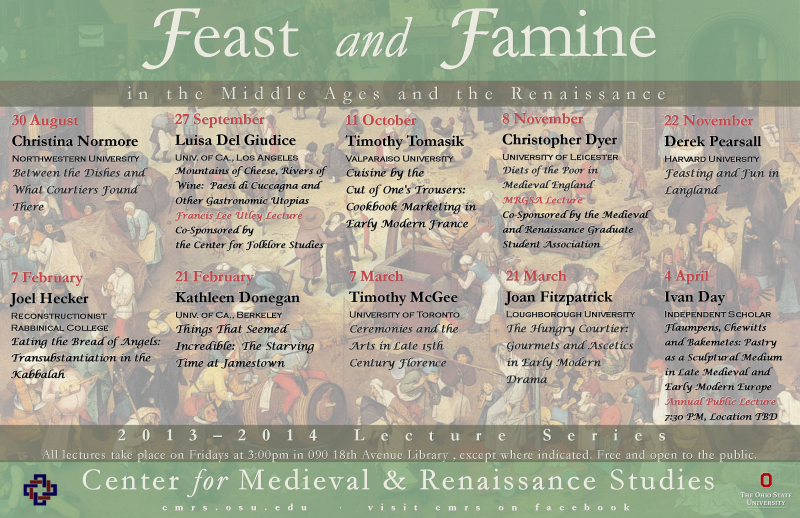 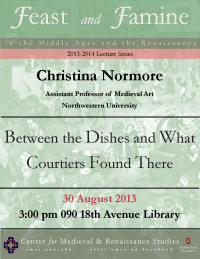 30 August: "Between the Dishes and What Courtiers Found There"

Abstract: In the fourteenth and fifteenth centuries, court banquets were lifted beyond the realm of everyday meals by the presence of what were termed entremets. Literally designating something between dishes, the category of the entremet mixed a range of media usually separated today, equally encompassing cooking, sculpture, automata and live performances. The aesthetic response to this boundary crossing was usually described in terms of the wonderful or marvelous. This talk considers some of the ways in which the entremet and its attendant wonder allow us to rethink common assumptions concerning both the distinctions between media and the relationship between the secular and sacred in late medieval artistic production. 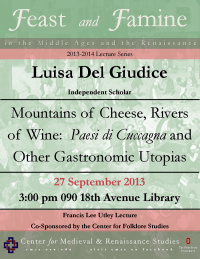 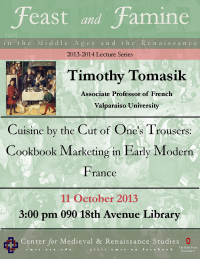 Contrary to what some culinary historians have been asserting up until the last decade or so, the French Renaissance did actually have a thriving trade in homegrown cookbooks. Beginning in the 1530’s, a new generation of cookbooks appears in France that synthesizes the innovations of earlier sixteenth-century texts.  Between 1536 and 1627 appear twenty-seven editions of a cookbook associated with the printer Pierre Sergent, bearing witness to the literate public’s appetite for works of cookery.  By analyzing title pages, woodcuts, and prefatory remarks, we can see that cookbooks were being marketed to a wide spectrum of social stations and potential readerships, each representing contradictory desires.  This analysis demonstrates that questions of conviviality are not limited to an elite sector of society.  The early modern French banquet is a space whose contours can be adapted to fit a number of occasions, accommodating diners from all strata of society. 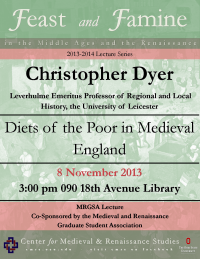 8 November: "Diets of the Poor in Medieval England"

If we can know about the food and drink consumed by the medieval poor, we can understand their role in society. In the middle ages beggars and vagrants were regarded as a race apart, a desperate underclass, leading a separate existence. If we examine the diets consumed by poor people, from the doles that they were given, the diets that prevailed in hospitals and almshouses, and the types of bread that they could obtain, we find that they suffered disadvantages, but they can be compared with mainstream society. Many of the poor were regular people who through misfortunes, circumstances or just old age were down on their luck. 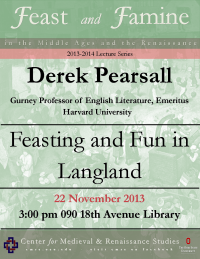 There are the expected references to food in ‘Piers Plowman’, and in addition Langland offers unusual insights into the actual diet of peasants during the hard months (of summer). There are also two major scenes of feasting, important in the developing narrative and in the understanding of Langland’s specialized techniques of allegory. Finally, in the category of ‘Fun’, there is allusion in the poem to some unexpected forms of entertainment at public feasts, which leads to some interesting historical revelations. 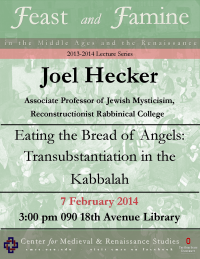 7 Februarary: "Eating the Bread of Angels: Transmutation in the Kabbalah"

Medieval Jewish mystics drew on the same Neoplatonic lines of thinking as their Christian neighbors did, developing theology and practices that facilitated knowledge of, and union with, divinity. Much of the kabbalah of the Zohar, Judaism’s central and canonical mystical text, interprets biblical stories and rituals that deal with food as opportunities to explore the mystical possibilities inherent in Jewish lore and practice. Inevitably, manna, unleavened bread, wine for the Friday night Kiddush, etc., are all transformed into symbols through which one encounters Shekhinah and YHVH, the feminine and masculine aspects of divinity. In his talk, Joel Hecker will explore the ways in which common foods and idealized edibles perform the task of incarnating divinity, transmuting God, food, and human beings in the process. 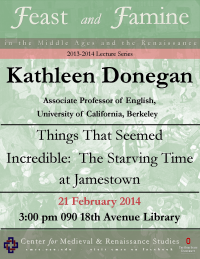 21 February: "Things That Seemed Incredible: The Starving Time at Jamestown"

In the desperate winter of 1610, mass starvation reduced the settler population of colonial Jamestown from 500 to 60. This paper uses the specter of starvation at Jamestown to explore a larger and ongoing relationship between suffering and violence, hazard and horror at the site of colonial settlement. Connecting the misery of “Starving Time” to the viciousness of the first Anglo-Powhatan war, the paper will trace how, as structures of meaning crumbled in Jamestown, the colonial arena became a theater of atrocity wherein settlers did (in the words of one) “things which seame incredible.” And because the place called “Jamestown” was always also the place called “Paspahegh,” the extremities committed there left behind a harrowing history for natives and settlers alike. 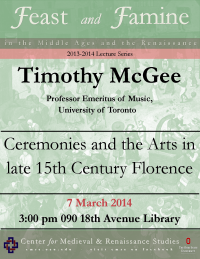 7 March: "Ceremonies and the Arts in late 15th Century Florence"

The arrival of Girolomo Savonarola in 1490 had serious implications for the traditional public ceremonies in Florence as well as the practices of music and art. The elaborate public ceremonial events were either eliminated or converted to sacred ceremonies; the sophisticated music was curtailed and professional choirs disbanded; and artists were encouraged to confine their work to sacred subjects. It is generally thought that the artistic community completely surrendered to the new restrictions, but the discovery of a disguised protest in a painting by Filippino Lippi leads to the suggestion that this may not have been so. 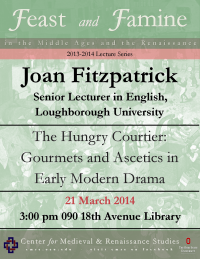 This paper will trace attitudes to excessive consumption and fasting in the early modern period. By considering the church line on gluttony and fasting and how such excesses were regarded in sixteenth-century dietary literature we can get a sense of the strictures in place regarding this particular 'sin of the mouth'. Shakespeare was rather less judgemental than the Church and from his plays the paper will move to a close consideration of 'the hungry courtier' in Beaumont and Fletcher's The Woman Hater, showing that critics have hitherto overlooked an illuminating debt to Shakespeare in their depiction of the gluttonous figure. 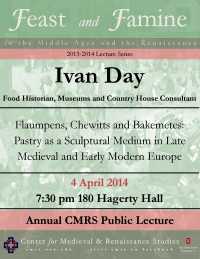 Flaumpens, Chewitts and Bakemetes - pastry and sugar as sculptural media in late medieval and early modern Europe.  In 1429 the eight year old Henry VI was presented at his coronation feast with a custard pie garnished with an English lion grasping a French fleur de lys in its claws. This edible emblem of territorial ambition and legitimacy to rule over the conquered is not an isolated example of  a food item purposefully loaded with meaning. From a pasty in the form of a bird served to the Worshipful Company of Salters at their Christmas Feast in 1394, to the funeral bake metes of Hamlet's murdered father, emblematic pastry and sugar sculpture were significant elements of renaissance dining culture. In this illustrated lecture, British food historian Ivan Day will discuss the role of food as an artistic medium and an occasional player in power politics and dynastic ambition.