**Please note: The university again plans to implement a mix of in-person and remote coursework for the Spring 2021 term.

Description: The European “Age of Discovery,” initiated by Portuguese conquests in North Africa and exploration of the Atlantic islands in the 1400s, involved a revolution in navigational and geographic knowledge and contact with other cultures that ushered in the first era of globalization. In this course we will explore narratives of travel and intercultural contact—not only victorious accounts of discovery and conquest, but also tales of failed expeditions, shipwreck, and captivity—produced by the Portuguese and their main competitors in European imperial expansion, particularly the Spanish, English, and French. Through the study of sixteenth- and seventeenth-century texts as well as films based on those texts, we will examine how such narratives shaped Europeans’ perceptions of their own and other cultures, generated and perpetuated stereotypes, and reflected and/or challenged imperial, colonial, and nationalist discourses.

Prereq: Not open to students with credit for Medieval 218. GE culture and ideas and diversity global studies course.

MedRen 2666 - Magic and Witchcraft in the Middle Ages and Renaissance

Description: In this interdisciplinary course, students will explore the history and culture of witchcraft and magic in Europe from about 400 C.E. to 1700 C.E., including examination of its religious, intellectual, and sociological contexts. As students gain basic knowledge of the history of witchcraft and magic during these periods (both actual practice and contemporary beliefs about that practice), they will develop some ability to understand why these practices and beliefs developed as they did and what societal and cultural needs drove them. 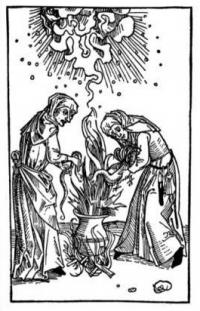 Readings for the course will be mainly primary materials—that is, treatises, trial transcripts, statutes, and literature from the medieval and early modern periods, as well as some biblical and classical

background texts. The main textbook will be The Witchcraft Sourcebook, ed. Brian Levack (2nd edition, 2015); you will also need copies of Medea and Doctor Faustus, for which online links will be provided. Additional short readings and lecture outlines will be posted on Canvas. We will be watching several movies, as well as discussing film clips and magic/witchcraft-themed music.

The course will be delivered entirely online, with two prerecorded lectures per week plus one synchronous class (55 minutes). Assignments will include weekly participation in an online discussion group, three fact-based quizzes, and a final exam.

Prereq: Not open to students with credit for Medieval 240. GE culture and ideas and diversity global studies course.

Description: This course will explore the rich tradition of Arthuriana that flourished in the Middle Ages and continues to thrive in modern popular culture.  We will sample a few of the earliest accounts of King Arthur in British histories, then look at the development of some of the most famous Arthur legends, including the quest for the holy grail and the tragic love story of Lancelot and Guinevere.  Authors to be read will include Geoffrey of Monmouth, Marie de France, Chretien de Troyes, and Thomas Malory.  We will also consider the incarnation of Arthurian characters and themes in modern literature and film.  Requirements will include a midterm, final exam, and research paper. 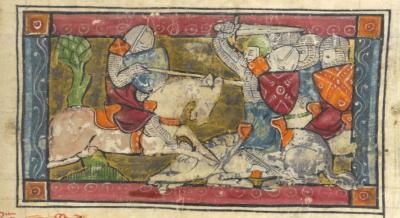 Prereq: 6 cr hrs in literature or permission of instructor. Not open to students with credit for Medieval 504.

Description: How did people in the Middle Ages and the Renaissance understand racial and ethnic differences? What role did race play in the social and cultural developments associated with the period, and in what ways were power relations configured through racism and racist logics? The last five years has seen an explosion of cutting-edge research focused on the study of “race before race,” meaning the construction of racialized identities that preceded the pseudo-scientific formulations of racial taxonomies developed in the nineteenth century. Their findings present a radically different vision of the period, one that challenges traditional narratives that create a fantasy of an all-white European past and that recognizes the centrality of race to

medieval and Renaissance history. This capstone course engages with that scholarship to offer an interdisciplinary exploration of race in pre-1800 Europe and the Mediterranean, drawing from literature, history, and art and a variety of national traditions. Capstone for MedRen majors.

Prereq: 6 credit hours in MedRen at the 2000 level or above. Repeatable to a maximum of 9 cr hrs.

Description: MEDREN 7899 will consist of 1 credit hour per semester for attending CMRS lectures, faculty colloquia and subsequent discussions. This will amount to: 4 1-hour+ lectures by visiting professors and at least 1 internal lecture and subsequent discussion (total 3 hours per event); at least one lunch with visiting faculty member (2 hours); active involvement with MRGSA and its activities; and meetings with the Center director (one hour once per term). With permission of the Director other professional activities (such as attendance at appropriate conferences, on- or off-campus) may be substituted.

Prereq: Grad standing. Repeatable to a maximum of 3 cr hrs. This course is graded S/U.

Class: 25743
Time: generally F 4:00-6:00 (in line with scheduled lectures and faculty/student colloquia)
Room: Varies, but events are likely to be held virtually for most of the Spring 2021 term due to continuing restrictions on in-person gatherings
Instructor: Christopher Highley (English)