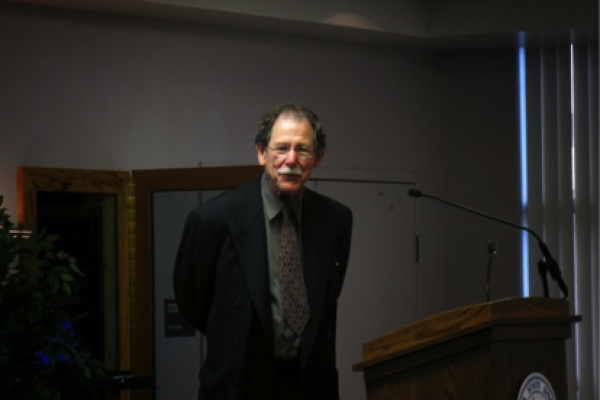 Bio: John Block Friedman is Professor Emeritus of English and Medieval Studies at the University of Illinois, Urbana-Champaign and a Visiting Scholar in the Center for Medieval and Renaissance Studies, The Ohio State University. He was a Guggenheim Memorial Foundation Fellow and was Herbert Johnson Distinguished Professor at the University of Wisconsin at Madison. He is the author or editor of a number of books, of which the best known is The Monstrous Races in Medieval Art and Thought (Harvard University Press, 1981; Syracuse University Press, 2000). He serves on the Editorial Board of the Chaucer Review. He is also the author of eighty articles and book chapters, most recently “Werewolf Transformation in the Manuscript Era,” The Journal of the Early Book Society;  “Dürer’s Rhinoceros and what he or she was wearing: Carnations, Luxury Gardens, Identity Formation, and Urban Splendor, 1460-1550,” The Journal of Material Culture; and “Coats, Collars, and Capes: Royal Fashions for Animals in the Early Modern Period,” Medieval Clothing and Textiles. His current project is “’Monstrous Men of Fashion’: Striped Costume and Livery in a Danish Church Wall Painting.” He breeds werewolves in his spare time.

Abstract: “Dressed to Kill: Establishing Cultural Identity in an Illustrated Polish Devotional Manuscript” examines how specific clothing fashions spread throughout “mainstream” Northern Europe and beyond not so much by personal contact and resultant imitation but by means of visual culture: representations of fashion in manuscript miniatures, panel and wall paintings. So clothing styles peculiar to one occupational group were often adapted to others by artists traveling to non-“mainstream” and relatively remote geographical locations and used to illustrate literary, moral or satirical ideas. Such adaptations can give a “meaning” often overlooked by art historians not versed in fashion history.

For example, my long study of the relationship between literature and the visual arts has focused on, among other things, monstrous races of men believed to live in Africa and India, described in travel narratives, and shown in art. In the 1980’s I was particularly interested in how ideas of Alterity in literary texts such as Mandeville’s Travels describing these mysterious beings were made concrete by medieval artists.

But I see now that I had missed some of the shades of meaning inherent in Alterity. This became clear to me when I saw that some clearly satirical early sixteenth-century wall paintings of monstrous men in Raaby Church in Denmark I had discussed primarily as examples of Alterity I had then treated without any reference to their clothing and thus had not seen the point of the artist’s satire.  Returning to these paintings freshly, I saw that the painter of these monsters--a dog headed man, a man with his one foot over his head and a being with one eye in the center of his forehead, all with very prominent genitalia-- had made use of a distinctive attire for these creatures: garments such as very short doublets and very tight hose worn by German mercenary soldiers called landsknechte (the term means literally servants of the country) This force, whose extravagant fashion was virtually a uniform, was created in 1487 by the Emperor Maximilian I, and by the early sixteenth century was much hated wherever it had campaigned for its pillaging and its sexual depredations in agricultural areas. So by putting his monsters in such clothing and showing them with the genitalia typically revealed by such attire, the wall painter could appeal both to the congregation’s suspicion of fashion excess and fashion’s perceived connection with sexual immorality.

Recently I noticed that a painter in Krakow, Poland in the 1530s, known to art historians as the Passion Master, also used the same landsknechte fashion for similar satirical purposes in a work called Dominican Meditations, the subject for this colloquium. Its devotional texts treat the last stages of Christ’s life, with miniatures illustrating the main theme of each text. These depict in minute and obsessive detail Christ’s torments by Roman and Jewish officials, but the artist is able to go well beyond the texts in heightening the work’s affective piety.

By modeling in his miniatures the cut and color of their attire on landsknechte clothing, the Passion Master created a specific contemporary identity for these Biblical tormentors, giving them through this clothing the constructed identity of a despised social group, an identity which brings from outside the DM a set of well-developed associations created through fashion. Using fabrics of yellow and green—colors used historically both to signify Jews and to indicate Christ’s betrayal by Judas-- the Passion Master dressed his tormentors in puffed doublets with slashed sleeves, shirts bulging below the doublet hem in a “ruffian” style, striped hose, often with garters, ostrich feather plumed headdress, and delicate pump-like shoes, borrowed from the wardrobe of landsknechte. I shall try to show this in detail by means of some of the DM’s miniatures and contemporary painting and graphics.

Here are two questions to consider in thinking about the DM. What are some of the means by which fashions of the deep past can be isolated and identified with reasonable certainty for purposes of transmission? And how does a jarring, anachronistic, or inconsonant fashion on a figure cause us to reconsider that figure’s role in a text?