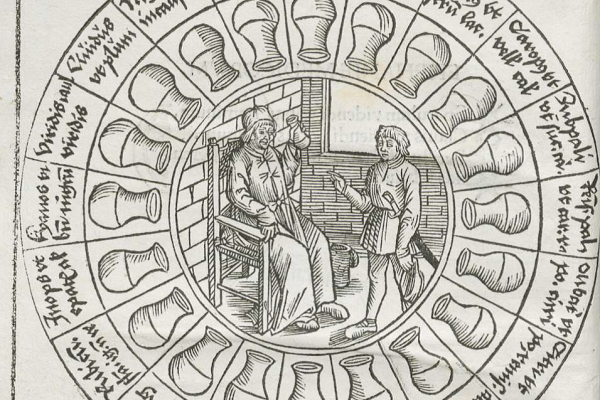 **The registration form for the symposium and special associated events is available here.**

The way in which early-modern Europe came to terms with the discovery of an unknown natural as well as human world in the Americas is a topic modern historians have tackled from a variety of angles. In the course of the last fifty years, it can be said to some extent that two broad perspectives have influenced much of the work done in this arena. On the one hand, there is what might be called an 'ecological history' of the phenomenon, pioneered by Alfred Crosby; on the other, a history focused on the ways in which Europeans apprehended and assimilated the natural world of the newly discovered continent, most famously developed in the work of Antonello Gerbi. Curiously, neither one of these approaches paid much attention to food, and to the ways in which Europeans came to terms with new foodstuffs and food systems encountered in the New World. In recent decades, the cultural turn in historiography has moved research beyond these two earlier paradigms and, in the process, opened the door to an entirely new approach to cultural history in the early-modern Atlantic world, where food history reveals itself to be an essential element for the observation and understanding of the complex interplay among diverse identities and traditions.

Bringing together a wide-ranging group of historians specializing in food history of Early Modern Europe and the Americas, the present symposium seeks to represent views from differing countries and scholarly-cultural backgrounds, focusing on many of the convergent issues that characterize what is now a rapidly developing historiographic area. The five invited scholars, coming to Columbus from Colombia, Italy, and England as well as the United States, will represent recent work that is being done but also promote an exchange of views concerning methods and approaches in a field that is still wide open to innovation. We aim to engage both the speakers and the public in a constructive and exploratory exchange of ideas, including not only individual scholarly papers but also a series of group discussions, culminating in a round-table panel at the end of the proceedings.

Doctors - as well as any health conscious consumer of the Renaissance – habitually considered the impact that solid foods and liquids were thought to have on the human body. While some of this information was available in a variety of written and oral sources (dietary treatises, literary texts, recipe books, and so on), individuals could also rely on their own senses to try and understand the characteristics and qualities of what they chose to eat or drink. Two senses in particular were singled out as the ones giving the most trustworthy information: taste and sight. Both the taste system of the Renaissance (derived from Aristotelian parameters) and the food-related color spectrum were integrated into a widely understood frame of reference that was used not only by doctors and consumers for health-related concerns, but also by artists and writers to communicate social and cultural meaning.

Allen J. Grieco (PhD École des Hautes Études en Sciences Sociales) is Senior Research Associate in History at Villa I Tatti (The Harvard University Centre for Italian Renaissance Studies). Dr. Grieco has published extensively on the cultural history of food in Italy from the 14th to the 16th centuries and co edited several collective volumes amongst which: Food Excesses and Constraints in Europe, special issue of Food & History (2006), Dalla vite al vino. Fonti e problemi della vitivinicoltura italiana nel medioevo (Bologna, 1994) and Le Monde végétal (XIIe–XVIIe siècles): savoirs et usages sociaux (Vincennes, 1993). Currently co editor-in-chief of Food & History (Turnhout, Brepols), he is also in charge of a bibliographic project on the history of food in Europe funded by the Mellon Foundation and the Bibliothèque Nationale de France. He has taught at Harvard as well as at the University of Florence and Bologna, and has created an English-language M.A. program at the Università delle Scienze Gastronomiche, Pollenzo (Italy).

In the newly discovered Americas, Europeans resorted to different strategies to describe the food products they encountered. Analogy was one of the most common, since it allowed for the comparison between what was new and what was known, amplifying similarities and reducing differences. I suggest that there are different types of analogies based on morphological characteristics, taxonomical ones or even referred to the perceived taste, etc. Likewise, analogies presented various degrees of “explanatory pertinence”, because they could be used only to name a fruit, but also because they pointed to a more complex relationship between the compared items. Besides establishing the types of analogies used, I seek to analyze the medical and dietetic concepts in which they were cemented, as well as the impact they produced in everyday life.

Gregorio Saldarriaga Escobar is an Associate Professor of History at the Universidad de Antioquia (Colombia), where he has also been coordinator of the Master and the Research Group of Social History, and director of the Research Center of Social Sciences and Humanities. His work has focused on the history of food during 16th and 17th centuries in Colombia and Latin America, emphasizing the relationship between production, symbols, and identities, and how they were all transformed by the colonial system. He has a Ph.D in History from El Colegio de México A.C. and was Debora Brice Loeb Fellow at Villa I Tatti (2014-2015).

Rebecca Earle (University of Warwick) – "Food for Workers and 'Negros'":  Colonialism and Dietary Reform in the Global Eighteenth Century

While in earlier centuries harvest scenes in art were alive with the muscular bodies, scythes and flails central to the hard work of reaping and threshing, eighteenth-century works instead depicted docile workers destitute of sharp tools, 'anxious to learn and to be guided.'  The enlightened promotion of new roots and fruits to feed colonial and working populations dreamed of building such strong yet obedient bodies, whose well-being was quickly subsumed into the transcendent felicity of a public to which they did not belong, but whose own happiness their labour helped ensure.  Writers from across the colonial world composed treatises, drafted proposals and discussed among themselves the ways in which they might promote the common good. The enthusiastic celebration of nutritious foods constituted one way of inscribing themselves within the machinery of happiness. It was perhaps for this reason that posterity’s most famous advocate of the pursuit of happiness, Thomas Jefferson, was so enthusiastic about his own role in disseminating new foodstuffs.

Rebecca Earle teaches history at the University of Warwick.  She is a cultural historian of Spanish America whose research has for some years been characterised by its broad geographical remit and engagement with broad historical questions, particularly about identity, memory and embodiment.  Her second monograph, The Return of the Native (Duke UP 2008), offered a hemispheric interpretation of elite nationalism in post-colonial Spanish America.  More recently her work has examined the colonial era.  The Body of the Conquistador (Cambridge UP, 2012) explores the centrality of food to the construction of colonial space.  It was awarded the 2013 Bolton-Johnson Prize for the best work in English on Latin American history.  Her current investigations grow out of my interest in the cultural significance of food and eating, and studies the impact of new world foods on early modern European mentalities and political culture.

The paper will deal with the information on pre-Hispanic Aztec food system as they were recorded in early colonial Spanish texts. Rather than attempting to provide a detailed reconstruction of the ancient Aztec diet, it will investigate which kinds of information on Aztec food practices, taxonomies, and values were transmitted by native informants to Spanish writers, especially the so-called friars-ethnographers. Both the informants and the friars acted according to their own cultural frameworks and political agendas, producing hybrid texts where indigenous gastronomic knowledge was poured, translated and transformed in complex ways that reflect the wider political and cultural dynamics of the emerging colonial society.

As an archaeologist, he participated in research projects in Peru, Easter Island, and Mexico. From 1998 to 2010 he has co-directed, with Thomas A. Lee Whiting (Universidad de Ciencias y Artes de Chiapas, Mexico), the Río La Venta Archaeological Project (Chiapas, Mexico); since 2011 is director of The Cahokia Project, an archaeological research project in Cahokia (IL, USA), carried out in cooperation with John Kelly, Department of Anthropology, Washington University, St. Louis (Missouri, USA).

He is currently carrying out researches on the analytical identification of painting materials on pre-Hispanic Mesoamerican codices, on the history of Italian collecting of Mexican objects in the 16th and 17th century, and on food-related information as it was recorded in 16th-century Mexican colonial sources.

Occasions centering on food conveyed an unparalleled richness of symbolic meaning for native groups and early travelers.  English travelers, alert to the conventions of travel writing, were keen observers and careful witnesses, characteristics not always stressed in the scholarly literature.  With this in mind, this paper will attempt to nudge the scholarship on early America out of familiar lines of interpretation that relegate the early period to prelude: a colorful period of mutual misinterpretation or else a time of chaos and violence.  This essay will draw lines of continuity where others mark discontinuities, and it will focus in particular on the area of symbolic communication, which was especially rich when foods were present.

Michael A. LaCombe is an Associate Professor of History at Adelphi University in Garden City, Long Island, New York, where he teaches courses in early America, the American Revolution, and Food in US History.  His 2010 article in the American Historical Review and 2012 book Political Gastronomy: Food and Authority in the English Atlantic World (Penn) placed food at the center of political struggles in the early period.  He has begun work on a project examining English efforts to claim the landscape of seventeenth-century Long Island while remaining interested in early American understandings of food, expert knowledge, and political authority.  He lives in Bensonhurst, Brooklyn, with his wife and three daughters.